For some time now I’ve been using the BAG buildings in QGIS as an alternative to the Top10NL buildings. The BAG buildings are more accurate, after all. This is not to disqualify the Top10NL, on the contrary: each geo data set has its own merits. The Top10NL is unbeatable regarding terrain details. As for the Open Street Map (OSM), that would of course be the road lines, which is updated daily by a community of enthusiasts. As the Top10NL usually lags behind a few years, it is tempting to use the OSM roads as an alternative to the Top10NL roads. But can the OSM roads be rendered just as if they look like the Top10NL roads? The answer is: yes, if you keep using a few specific lines of the Top10NL. Here’s a sample of Highway junction Raasdorp near Haarlem-Amsterdam, where the brand new A5 highway is already available in OSM but not yet in the Top10NL (made in QGIS 1.8)

Top10NL (april 2013/from aerial photo 2011), OSM (22 june 2013) and BAG (april 2013) to render an actual map.
The Dutch OSM roads are downloadable als shapefiles from http://download.geofabrik.de/europe.html. When using Top10NL, you do need to convert the OSM roads to the RD coordinate system, which is easy in QGIS 1.8. Add the OSM vector layer “Roads”, select it with right mouse button and choose “Save as…”. Choose ESRI Shapefile and select the correct CRS (Amersfoort / RD New, EPSG:28992). This results in a shapefile of 264Mb. Add that layer to the Top10NL layers and off we go.
The Top10NL roads are polygons, allowing the exact width of each road to be rendered. OSM roads are lines, so all roads have the same width. This may sound like a disadvantage, but in practice this is no nuisance. The example above uses a scale of 1:25000, and roads that seem to be wider are actually double rendered lines in the data (for both sides of the road). The colouring of the roads is easy thanks to the attribute “type” that allows the colouring on values such as “trunk”, “motorway”, “primary”, “secondary”, etc. The Top10NL and OSM differ on occasion on wheter a road is a primary road or secondary road, but that only goes to show the subjectivity of such labeling. Of course, the dark grey lining below the roads is easily done by adding the same map layer just below the coloured roads and making it slightly broader.
The Top10NL ‘problem’ of lining roads at non-level crossings is easily solved using OSM thanks to the attributes “Tunnel” and “Bridge”. For roads crossing above other roads of the same type, add that piece of road (filtered on “Bridge > 0”) plus another copy of that layer with dark grey lining slightly off-bias to both sides.
So no drawbacks? One obvious argument could be that OSM doesn’t guarantee a complete and correct map because it’s updated by so many different people. But as is well known these days, the quality of (at least the Dutch OSM) is astoundingly high. When zooming in, you can see some OSM lines not exactly following the actual line compared to the aerial photograph (a deviation of a meter is no exception), but on a scale such as 1:25000 that’s barely noticeable.
The great thing about all this newly available open source geodata is that QGIS offers such a wonderful vehicle to make the most out of these datasets and render a meaningful map image. The Top10NL is unbeatable regarding terrain image, the BAG on buildings, and the OSM on roads. I’m really looking forward to QGIS 2.0.
Jan-Willem van Aalst, www.imergis.nl

The building contours of BAG objects are much more precise than the standard built-up block shapes of the Top10NL topographic data set (aside from the fact that the BAG is more up-to-date than the Top10NL). The “BAG objects & addresses” data set also contains the usage function(s) of buildings. Using the BAG, it’s possible to quickly view locations of shops, entertainment areas, office parks, industrial zones and schools. But these usage functions are not part of a geometry column in the BAG, because a particular BAG residential object can have multiple usage functions (1:n relation). However, using the free Geon BAG convertor it’s possible to create a shapefile of BAG objects that include up to 2 usage functions per BAG residential object.
In QGIS, this point-shapefile may be used to visualise the usage function on top of the building contours. See the example below, using the following legend: 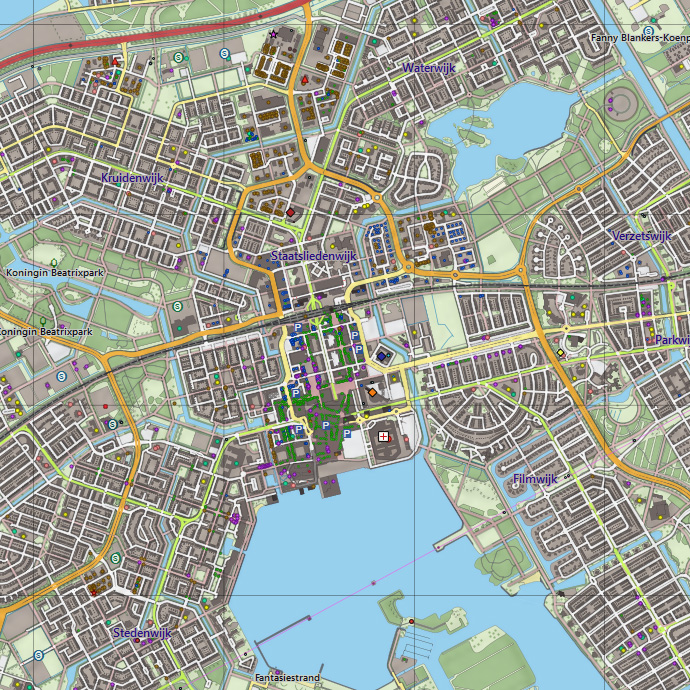 You can view the larger map including the full legend here.
The topographic map quickly shows the locations of stores, restaurants, office parks, schools, etc. A next step would be to color the entire area of a particular building instead of using a dot. However, this requires some more complex joining of attributes of tables. Anyone with a smart solution is most welcome to report it here.